“How old must you be”, I asked the elderly looking Peepal Tree. “Old enough buddy, old enough”, it replied with little hesitation and lot of vanity. “Look at my girth, my roots, my bark, the spread of my branches, size of my crown and let’s see you making an intelligent estimate of my age”, it said to me. “Couple hundred years, may be”, I said without much consideration. “I take it as a disrespect buddy; even the youthful Date-Palm that grows on my top is older than that. Look up if you have not seen it as yet” said the Peepal Tree with a definite degree of protest in its voice. And I looked up but couldn’t spot anything but the thick crown of the Peepal Tree itself. “You can’t have a clear view of things being too close to them”, said the Peepal Tree with a hint of wisdom in its voice this time, and with a pause “back up a little and to the east and you might see what I am trying to show you”. I obeyed without any further arguments and finally when approximately 40 meters apart from the “Super Proud Peepal”, I was able to see the reason for its pride in its antiquity, graciousness, and gracefulness. There, nestled in the saddle formed by top branches of its crown stood erect a tall, dark-trunked and somewhat rough looking date-palm tree almost as tall as the Peepal itself. It was a spectacle beyond words. I had seen trees grow at highly unassuming places like inside wells, building walls and rooftops, and sometimes in the middle of nowhere in deserts and wastelands. However, never in my life I had seen a tree grow on top of a tree and the host as well as the parasite both humongous in size, stature and maturity. I took a few snaps with my phone camera so I could share this rarity with my readers. The Peepal Tree seemed interested to prolong our conversation but I said my farewells and moved away to see other parts of the historic Wah Gardens of the Mughal Era. 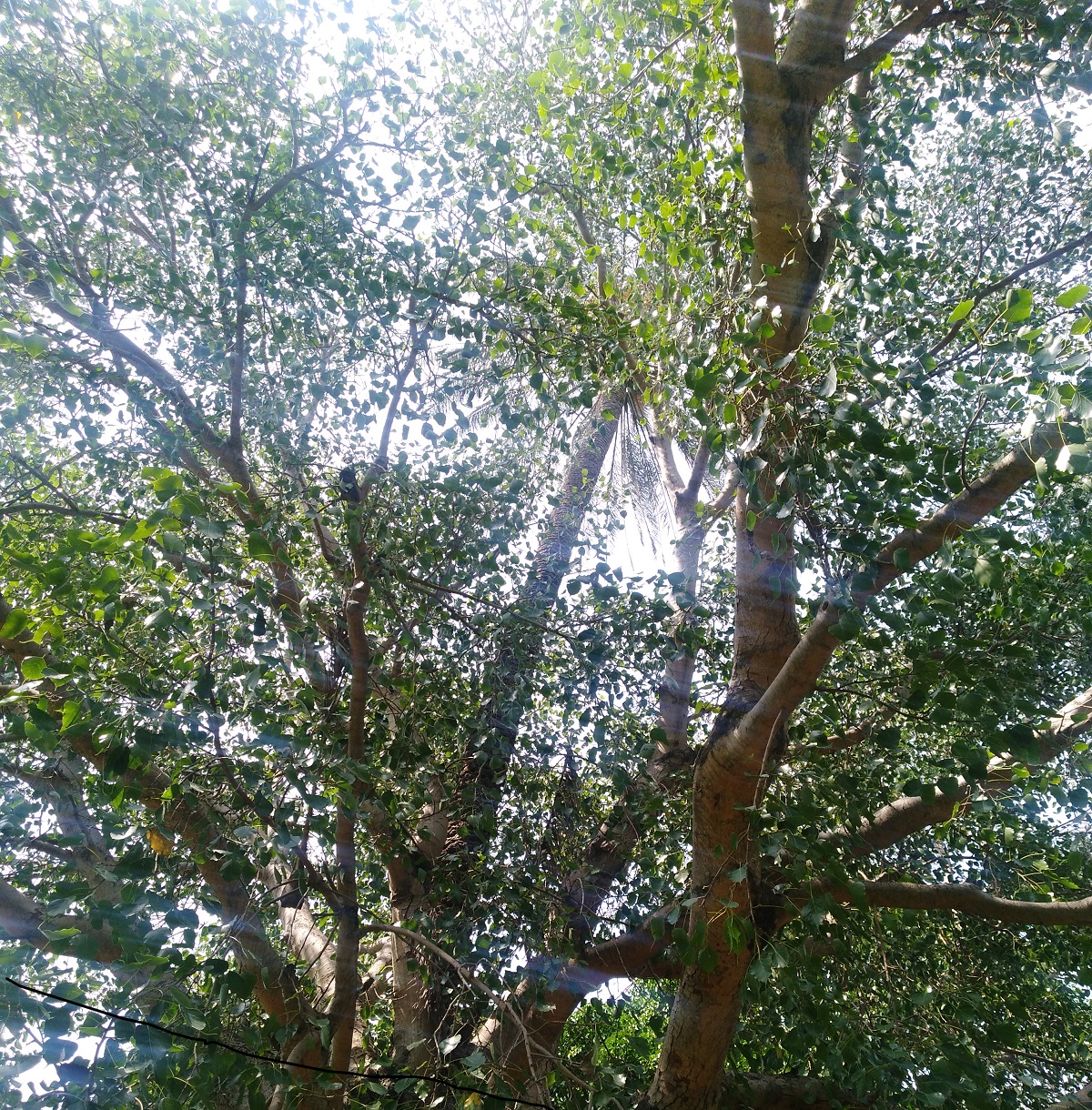 Located approximately 50 km north-west of twin cities of Rawalpindi-Islamabad, Wah Gardens (also known as Mughal Gardens Wah) is not only a tourist attraction but also a complex of significant interest for students of history, archeology, and architecture. No sooner you enter the gate of Wah Gardens everything seems to come to life; the trees, the blue water in the pool with plentiful ‘Mahasher’ fish, the waterways, the walkways, the aged cement structures that once were the reserves of princes, princesses and kings. You feel like being observed by ghosts of time and spirits of people that once used this place as a transit resort for their regal travels between Kabul and Delhi, the capital of their magnificent Mughal Dynasty.

Raja Maan Singh, court chief of Emperor Akbar and brother in law of Emperor Jehangir, is said to have commenced ground-breaking work at the Gardens Site. Emperor Jehangir, in his autobiography titled “Tozak-e-Jahangir” has mentioned his three days stay at this site in April 1607. He has especially mentioned the cleanliness and purity of water and the significant size of fish in the ponds here.

Emperor Shah Jehan stayed at Wah Gardens in 1639 during his visit to Afghanistan. It is believed that during this visit he tasked his central construction department to take on development work at the Gardens site. The famous Ahmed Maamar Lahori, an architect of global repute at that time, was assigned the task to plan and supervise the work at the site. Lahori is said to have prepared the layout of royal quarters, bathrooms, court areas and inns at the site. The completion of work took about two years. The major construction was done in stone and cement and limestone was used for plastering and decorations. Overall the site was prepared as a transit resort and does not have the usual palatial look found elsewhere in the Mughal constructions.

A view of famous Wah Gardens

The main beauty of the garden stems from intelligent placement of central pond with lot of fish, water channels and tree plantation. Plantation includes Peepal and Saroo (Thuja) and some local shrubs and bushes. The panorama around the garden is spectacular. I took several pictures of the view from the garden and other spots which I am sharing for you in the picture gallery below: 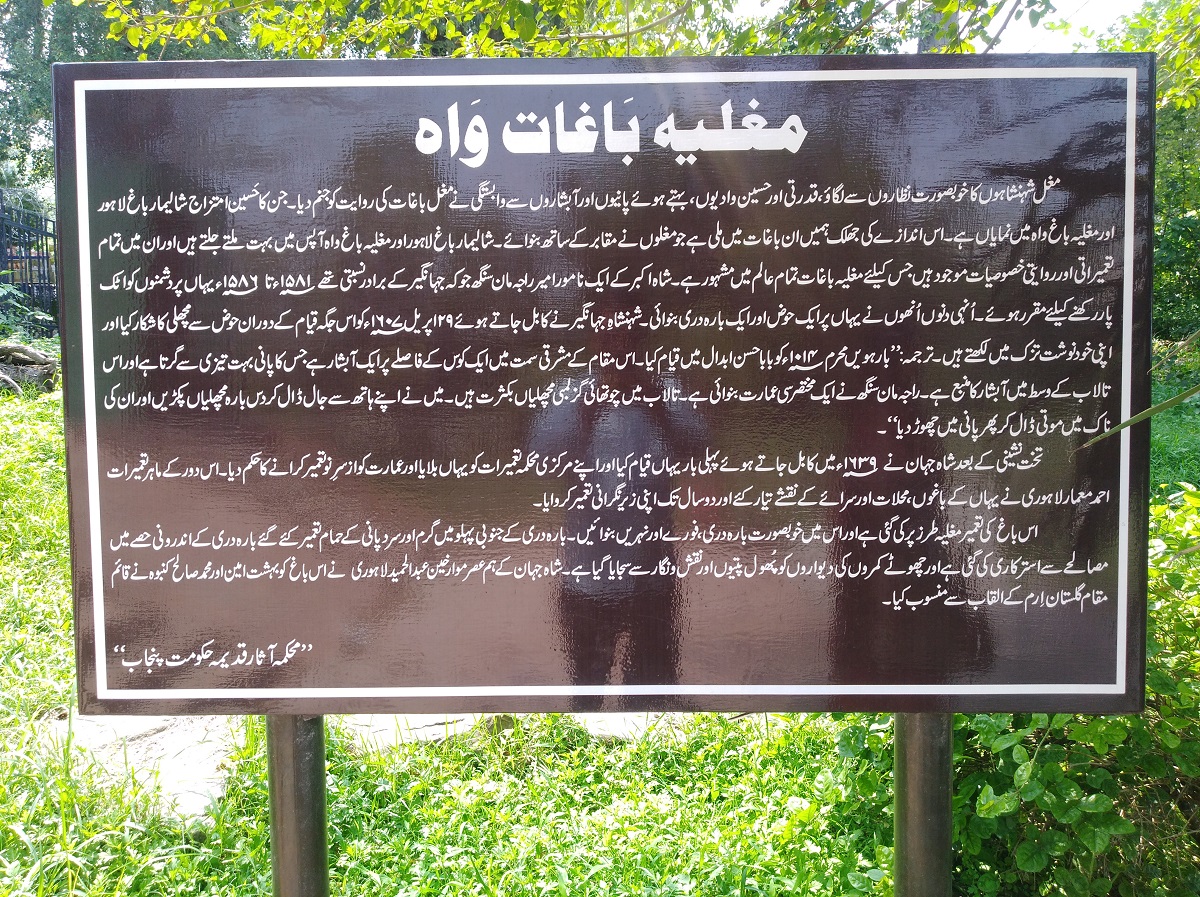 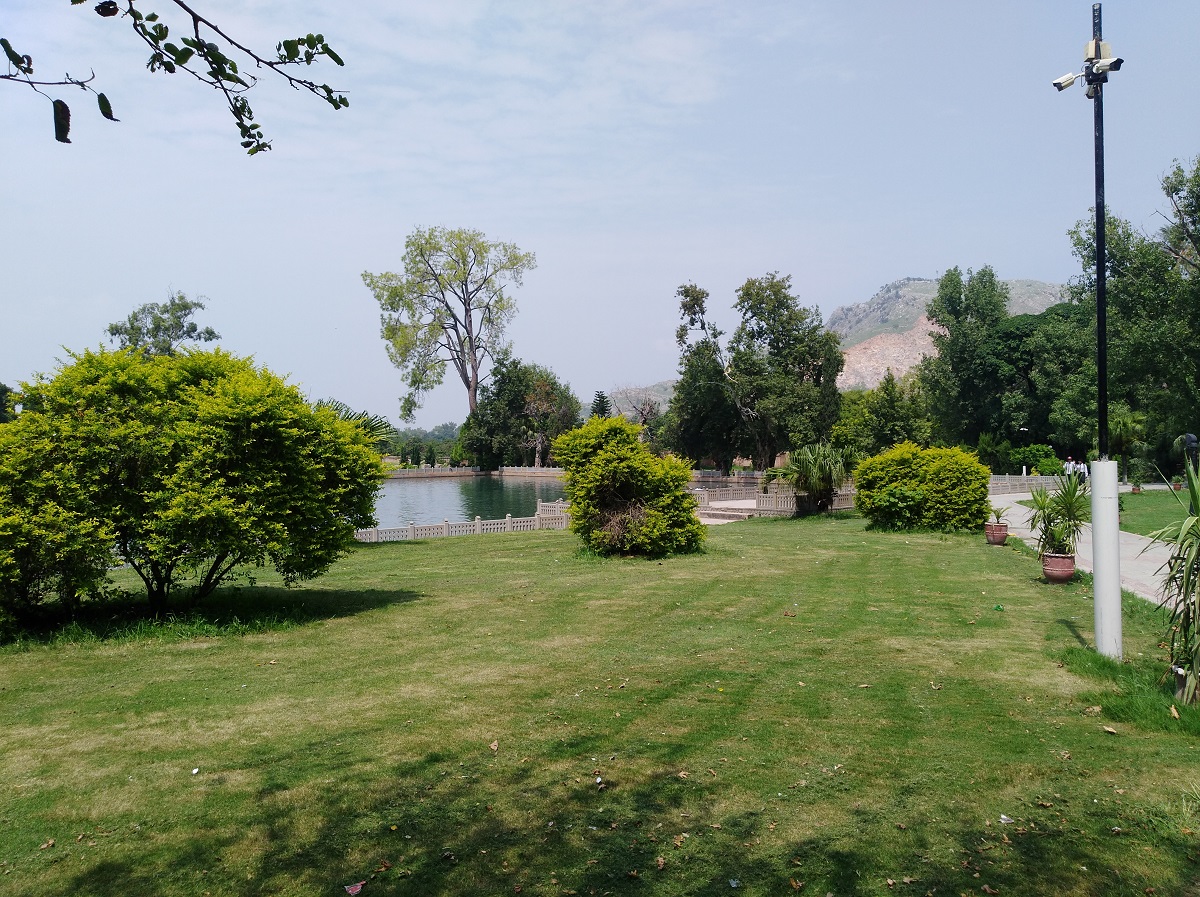 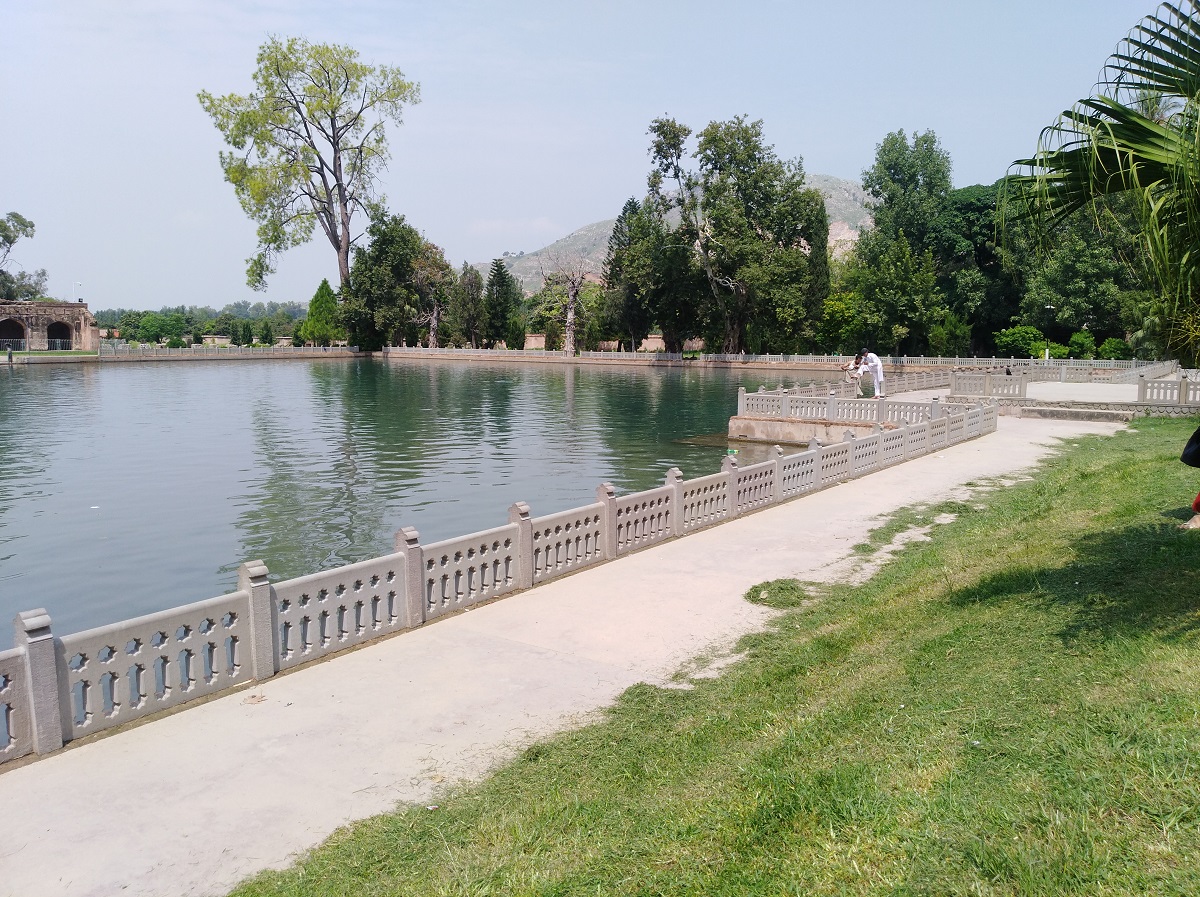 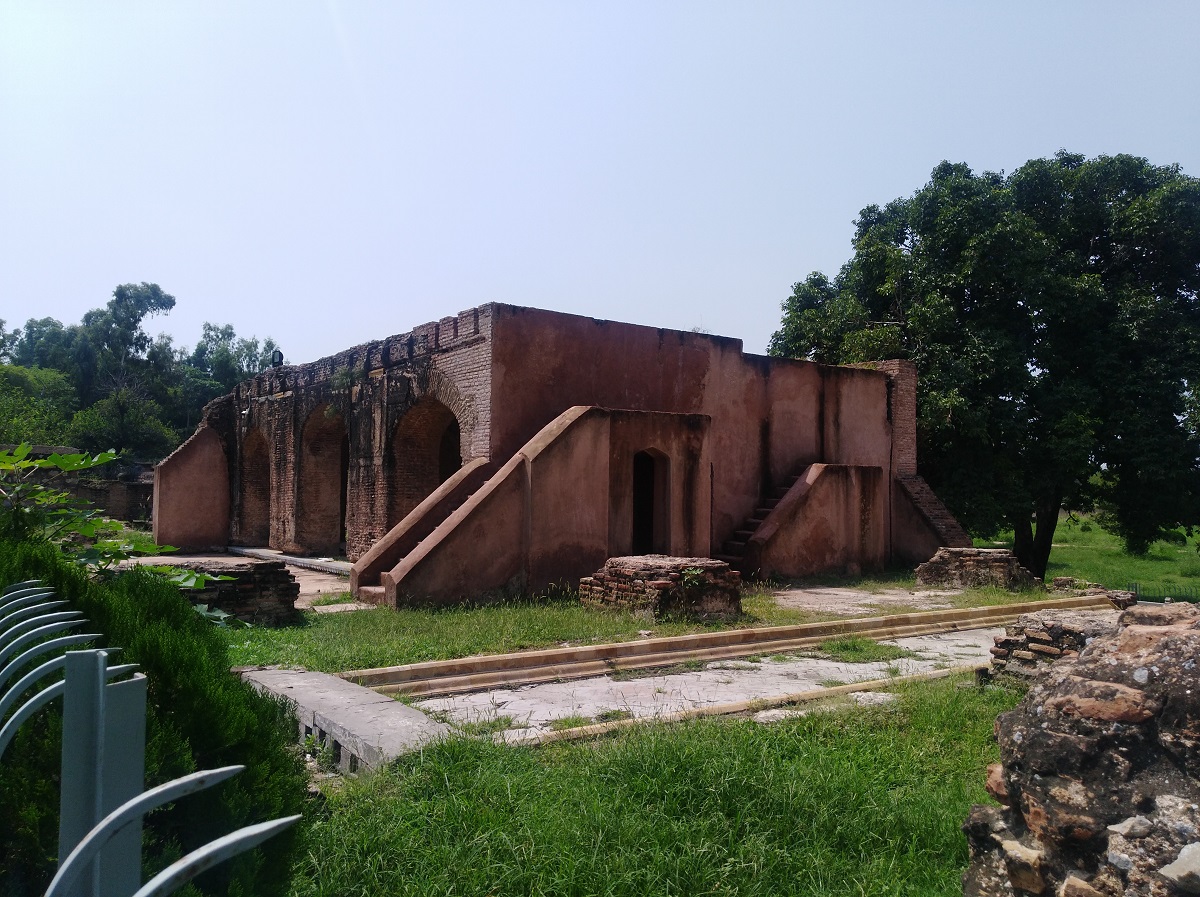 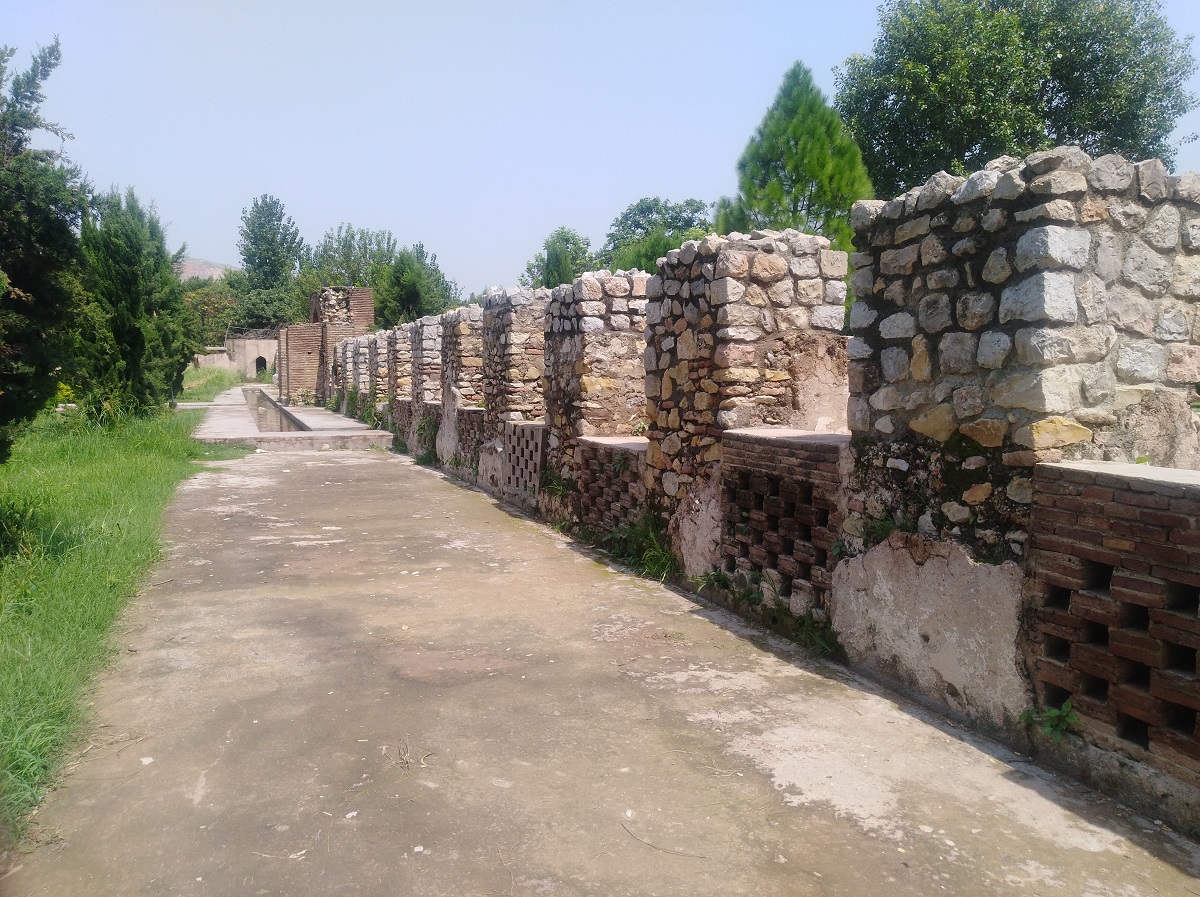