Skardu Valley is located in Gilgit-Baltistan region of Pakistan. The valley is approximately 201 km east of Gilgit and is connected by a metalled road. The valley is about 400 km square in area and is situated at an altitude of 2,228 m (7,310 ft). The beautiful Shigar River with its ice cold glacier waters joins the Mighty Indus River in Skardu Valley. The valley is surrounded by the spurs and lower peaks of the Karakoram Range. Skardu Valley with its lakes, surrounding valleys and mountains is a major tourist attraction. Skardu Valley is also the gateway to some of the major Eight-thousanders and other significant peaks like K2, Masherbrum, Broad Peak and Gasherbrum Series.

Skardu is the major town in the Gilgit-Baltistan region and serves as a preliminary base for mountaineering and trekking expeditions to the Mighty Karakoram Range. Trekking expeditions to the Baltoro Glacier often use Skardu as their first base. Skardu is also the headquarters of Skardu District and has all major public services and civic amenities. 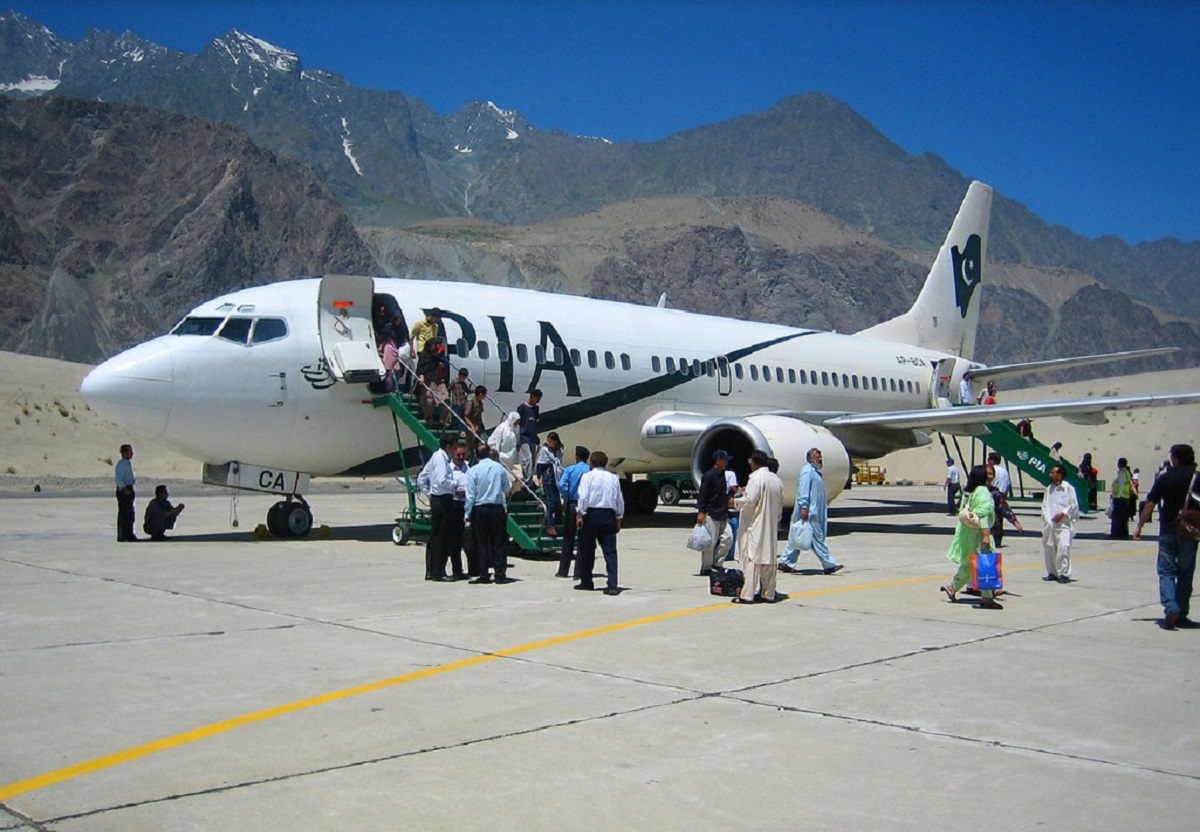 How to Get to Skardu Valley

You can get to Skardu by air or by road. Pakistan International Airlines has a daily flight from Islamabad Airport to Skardu. Regular bus service is available between Rawalpindi and Skardu on daily basis. NATCO (Northern Area Transport Company) has been plying buses between Rawalpindi and Skardu for over 40 years now and have experienced drivers on this route. You could drive in your own transport via KKH up to Gilgit and thereafter along Gilgit-Skardu Road. However, you must plan your stopovers, meals and rests properly as the drive can turn out to be pretty tiring especially due to sudden changes in weather and rainfall. You could hitchhike using the trucks plying along KKH. Drivers are usually very cooperative and hospitable to the outsiders. 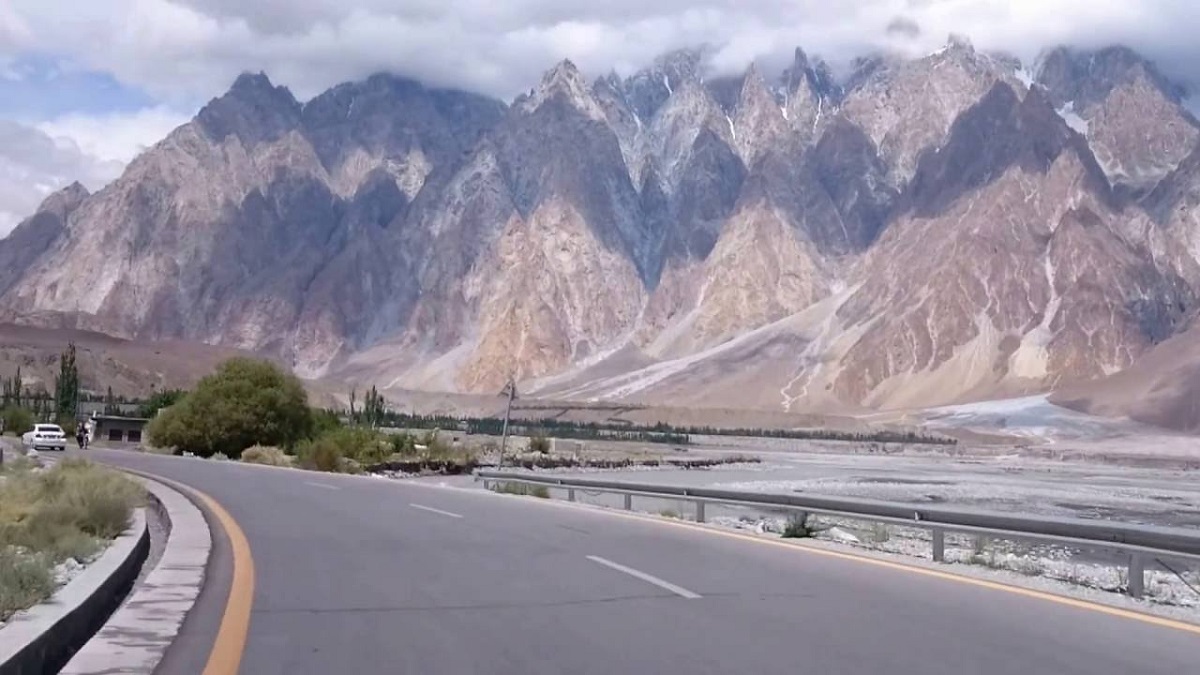 How to Move Around Within the Valley

Having your own transport is the best option for moving around within the valley. You could hire local taxies and 4x4 vehicles which are easily available. Local transport can be used but is usually overloaded and may not be to your liking. Skardu City has almost all the amenities and services. There are a number of hotels, lodges and inns catering to different budgets and tastes. The best part of the year to visit is between May and September. If you are attempting a major peak you would probably plan your timing with your expedition team. 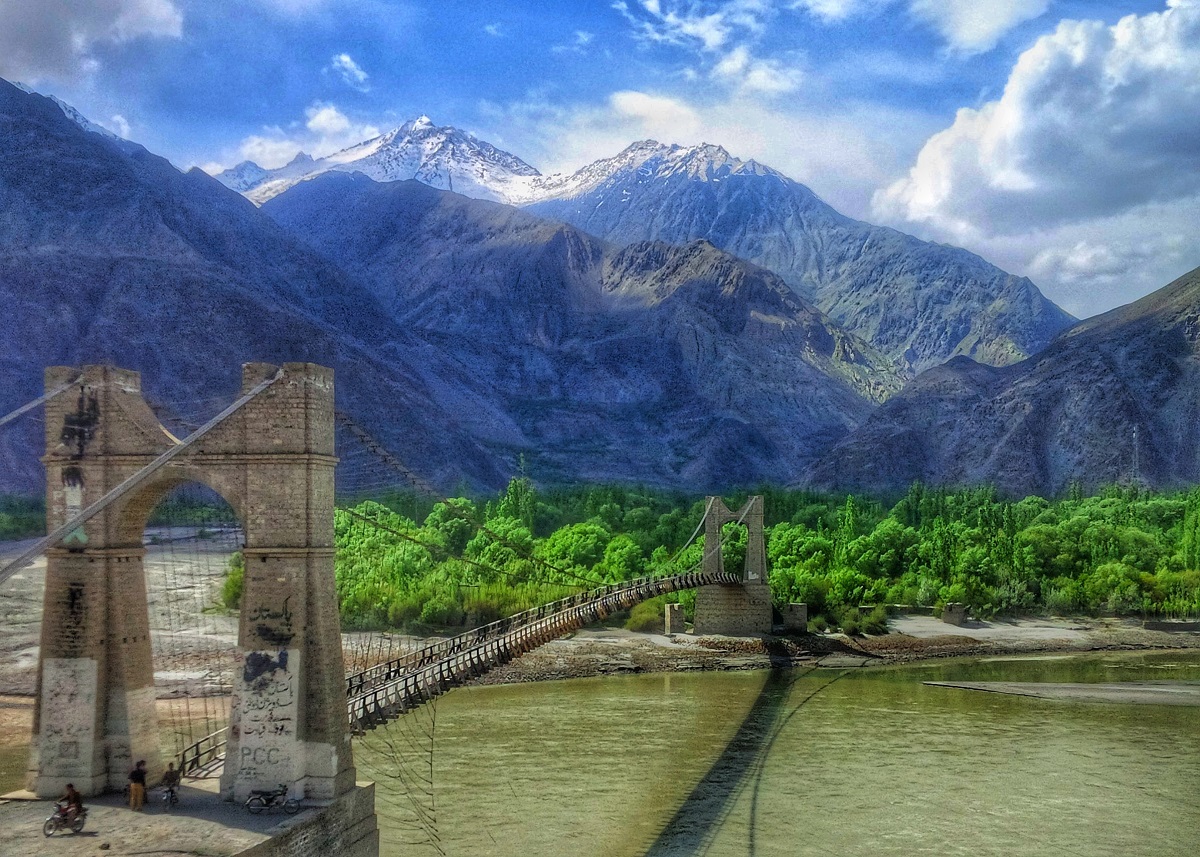 Depending upon time and resources available and your risk horizon Skardu Valley is loaded with world's top tourist attractions that include some of the highest peaks in the world, world's highest plateaus and alpine lakes fed by glacier waters. Some of the most commonly visited places are as follows:

Askole and Hushe Valleys that lie in the neighborhood of Skardu Valley and are accessible by road, are the gateways to the world famous Eight-thousanders like K2, Gasherbrums, Broad Peak, Trango Towers, and to fascinating glaciers like Baltoro, Biafo and Trango. Skardu thus serves as the main tourist and mountaineering base in the area. Skardu has fairly well developed mountaineering and hospitality infrastructure like equipment shops and hotels, motels and tourist guides centers. However, like all market economy driven cities, prices in Skardu are fairly high in the mountaineering and trekking season. 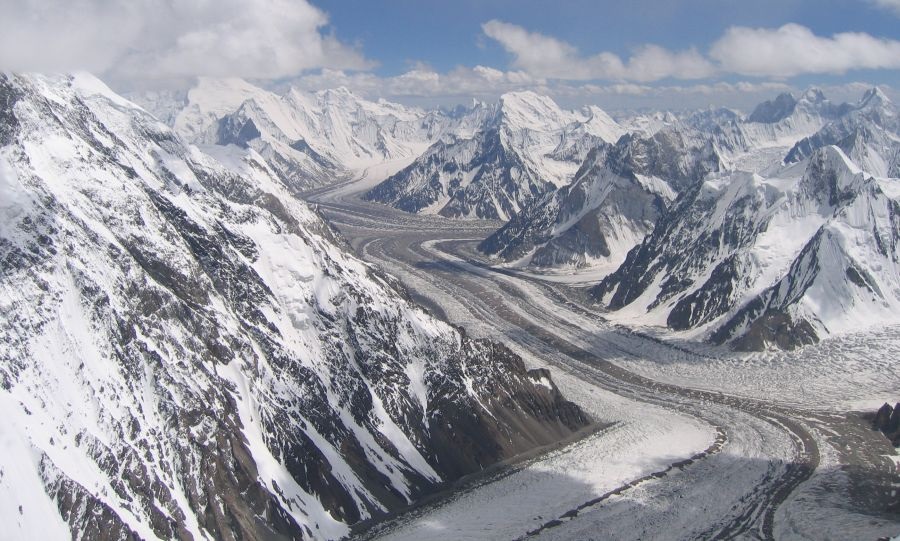 Khaplu, sometimes also spelled Khapalu is a medium sized town that is the headquarters of the Ghanche District of Gilgit-Baltistan, in northern Pakistan. Located at a distance of approximately 103 km east of Skardu, Khaply is a town of historical significance. Khaplu has been capital of Yabgo Dynasty that ruled over second-largest kingdom in old Baltistan. Khaplu was located on the traditional trade route to Ladakh along the Shyok River. Khaplu serves as the base for trekking and mountaineering expeditions into Hushe Valley and Masherbrum Mountains. Many of the famous mountains like Masherbrum, Sherpi Kangri, Saltoro Kangri, and several of the not so popular Seven-thousanders can be accessed from Khaplu. Khaplu Chaqchan Mosque, a 700 hundred years old wonder, founded by Ameer Kabeer Syed Ali Hamadani is also located at Khaply. Besides small lake formed by the Shyok River is also a noteworthy place to visit. The scenic beauty mixed with rugged boulders and alpine mountains make a spectacular panorama. 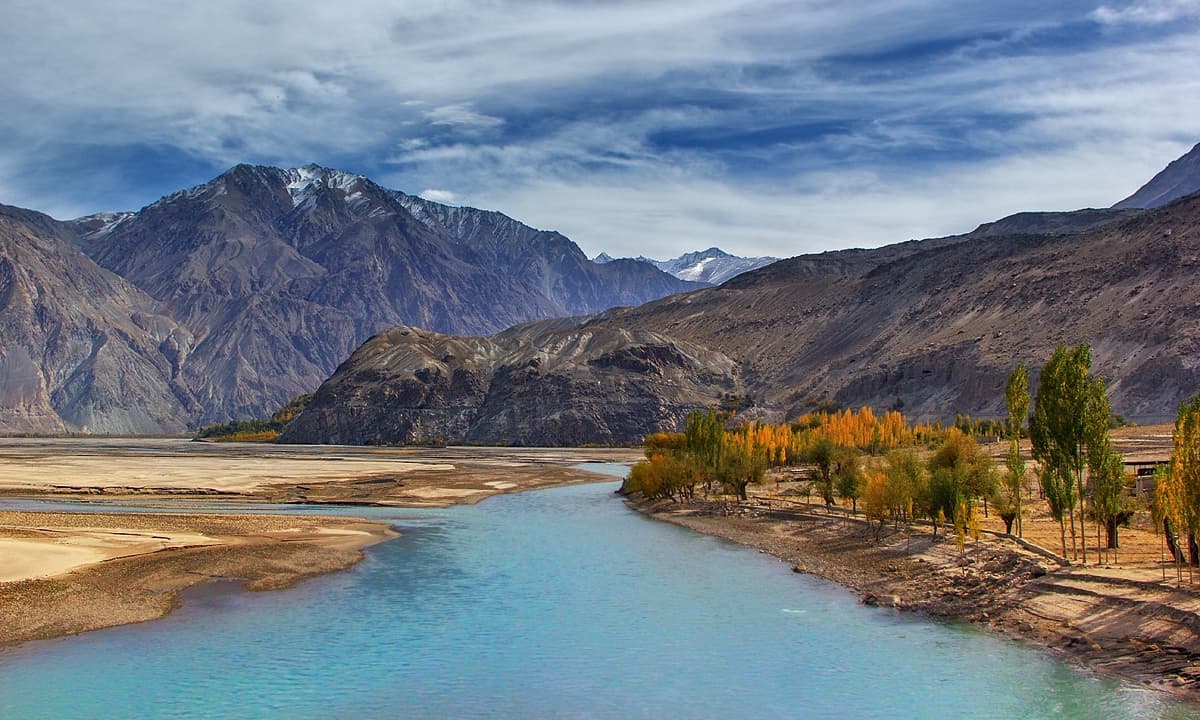 Located at an altitude of 2,636 meters (8,650 ft) above sea level Satpara Lake is the jewel in the beauty of Northern Areas of Pakistan. The lake is formed by the ice cold water from Satpara, a mountain stream that is fed by the surrounding glaciers and springs. A dam has recently been completed at this site for production of hydropower for city of Skardu and surrounding localities. 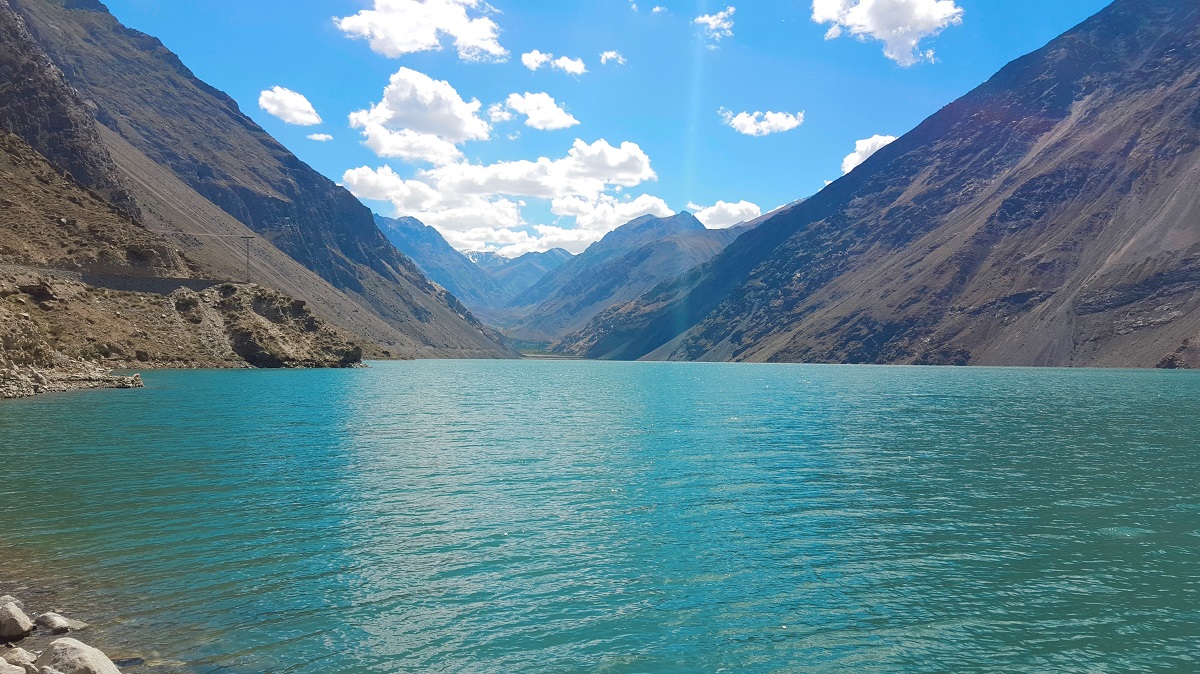 Lower Kachura Lake also called “Shangri-La Lake” with reference to the Shangri-La Tourist Resort located here is more popular amongst the visiting tourists due to its enhanced beauty. The resort has boating arrangements, colorful huts and a restaurant made in an aircraft that had done emergency landing sometime in the middle of the last century and was imaginatively used by the owners of the resort. The food here is expensive but quality is good. 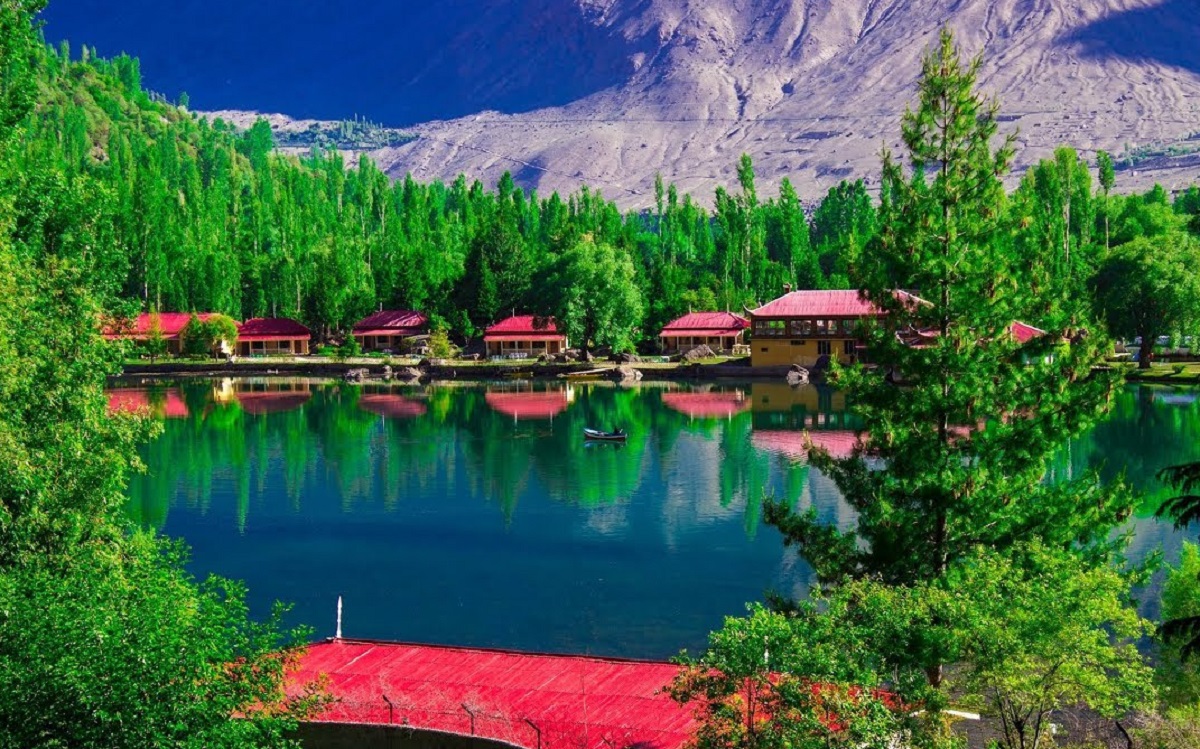 Skardu Fort called ‘Kharpocho’ by the locals is a fort located in the city of Skardu. The fort was built by King Ali Sher towards the end of the 16th century and has witnessed several centuries of rise and fall of different dynasties including the Dogra Rulers of Kashmir. The fort located on a rock that watches over the confluence of Shigar River with the Mighty Indus River must have been a strategic cantonment of its time.

Shigar Fort is another tourist attraction located in the town of Shigar within the Skardu Valley. The town was built by Raja of Amacha Dynasty of Shigar in 17th century and has been recently restored by a local NGO. The fort has a museum, a mosque and a hotel in the near vicinity. 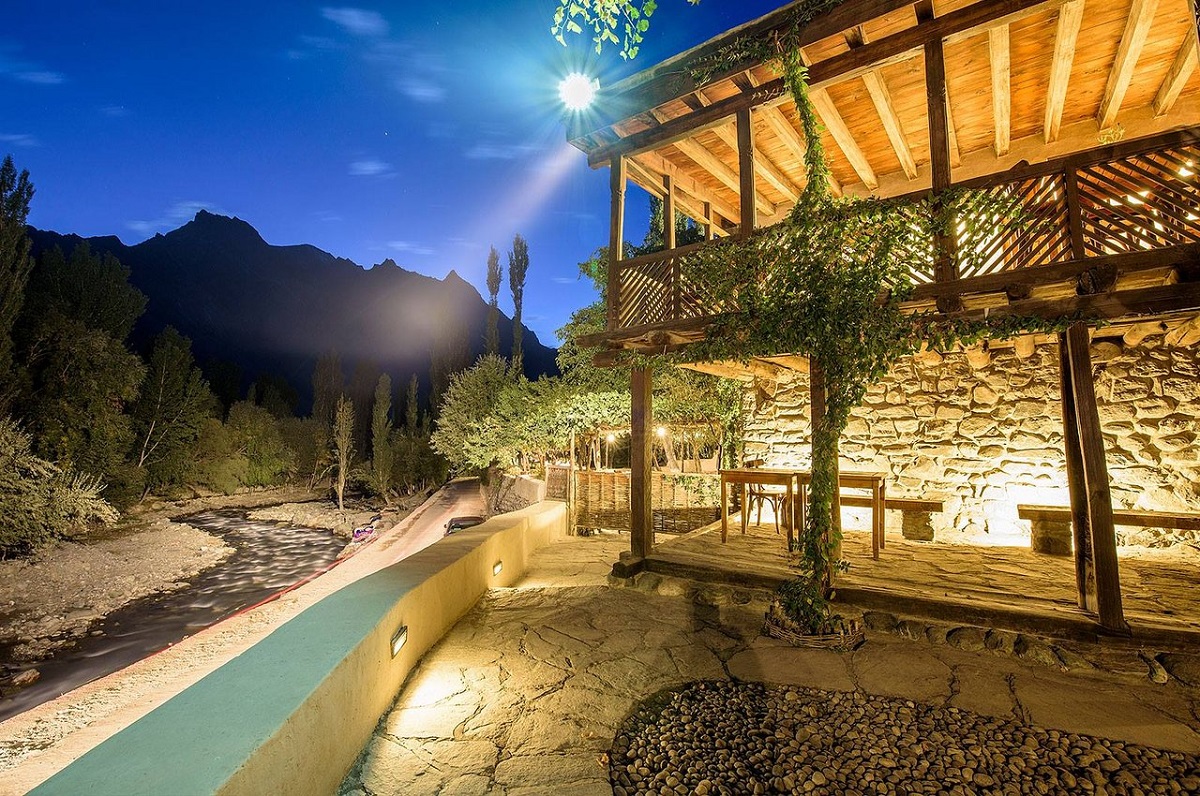 The Deosai National Park is a high-altitude alpine plain located approximately 30 km from Skardu. Deosai Plains are located at an elevation of 4,114 m (13,497 ft) above sea level and are the second highest plateau in the world. Deosai is also accessible from Galtari Kharmang District in the south-east and the Astore District in the west. However access from Skardu is the shortest and most tourist visit Deosai via Skardu.