Peshawar, pronounced ‘Pekhawar’ in Pashtu, is the capital city of the Province of Khyber Pakhtunkhwa, Pakistan. Peshawar is one of the most ancient cities of South Asia. Recorded history of Peshawar dates back to 700 BC. Peshawar has been the capital of many empires and dynasties that ruled over these areas and Afghanistan. It is believed that the city’s earliest name was Purushpura and served as the capital of Kushan Empire. Between 217-216 BC Peshawar was captured by Alexander the Great. The city has been captured and recaptured by many ruling dynasties and empires including White Huns, Mughals, the British, Sikhs and Durranis. Peshawar was on the forefront of movement for independence of Pakistan and have played important role on the political horizon of Pakistan since independence in 1947.

Peshawar has a rich cultural, social, educational and political history spanning over several millennia. Peshawar has been on the forefront of economic activity, communications and social developments in this part of the world. 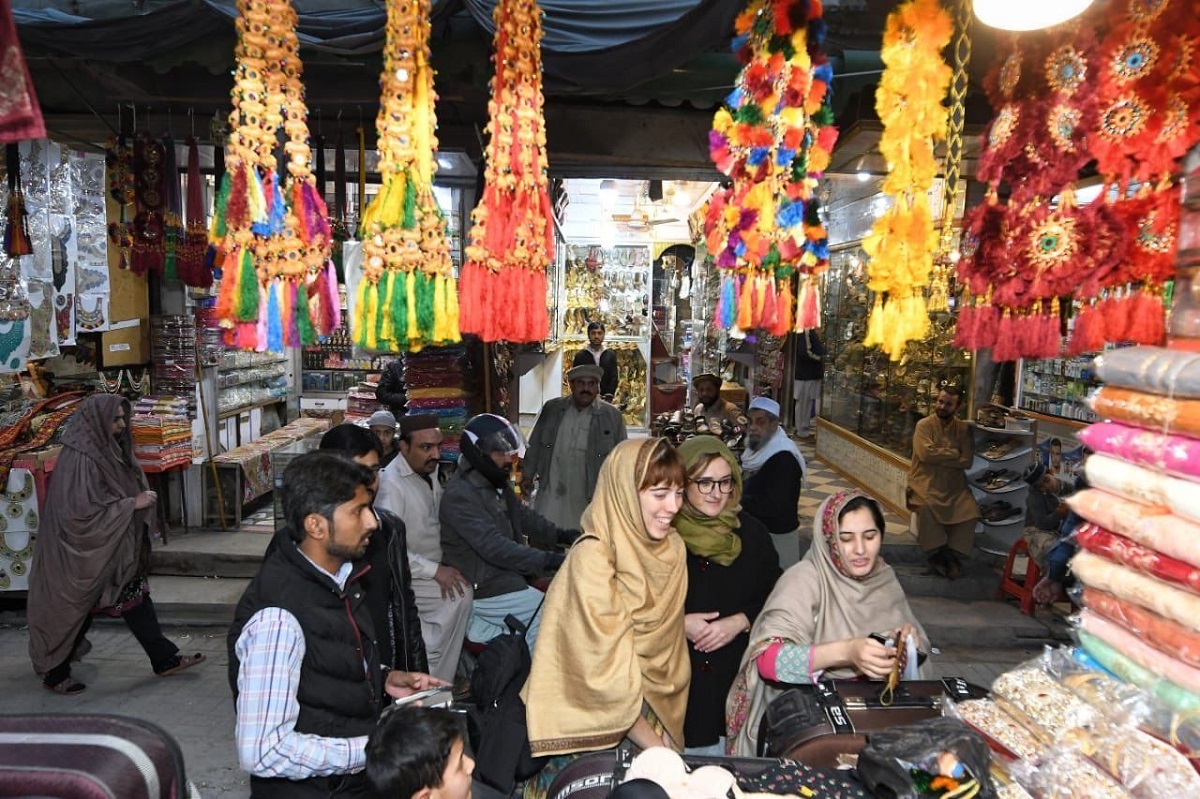 Peshawar has a mix of population of Pashtu speaking Pathans and Hindco speaking people called ‘Peshawari’. The two communities have always lived in peace and harmony and of late there has been a mixing up of the two communities by way of inter-race marriages. Peshawar has a visible minority of Sikhs and a small minority of Hindus, Buddhist and Christian communities. English is widely understood in Peshawar besides Urdu, Pashtu and Hindco. People of Peshawar are very hospitable and kind to the strangers and visitors.

The total population of Peshawar is estimated to be around 2 million thus making Peshawar the 5th largest city of Pakistan.

How to Get to Peshawar

Peshawar is also connected via train and bus service with almost all major towns and cities of Pakistan. To find railway and bus service to/from Peshawar you may click the following links:

Moving Around in Peshawar

Peshawar Metro Bus Service is the most economical and safest mode of travel within Peshawar. Local buses, minibuses, taxis and auto-rickshaws are abundantly available. Following operators run bus and taxi services that can be coordinated using their respective apps available on Google Play Store:

The old Peshawar City was a walled community but only remnants of the wall can be found now on places. Some of the most visited tourist attractions in Peshawar are as follows:

Khyber Pass, also known as Darra-e-Khyber by the locals is a mountain pass in the northwest of Peshawar on the border between Pakistan and Afghanistan. It connects the town of Landi Kotal to the Valley of Peshawar at Jamrud and traverses through the Spin Ghar mountains. The pass has been part of the ancient Silk Road and had a longstanding cultural, economic, and geopolitical significance in the region. The pass has been a strategic nodal point for trade between Central Asia and the Indian Subcontinent. The highest point of the pass is inside Pakistan at Landi Kotal, while the lowest point is at Jamrud in the Valley of Peshawar. The Khyber Pass is part of Asian Highway 1 (AH1).

Bab-e-Khyber is a gate like structure and a symbol which stands at the entrance of the Khyber Pass. The gate is located immediately west of Peshawar with the historic Jamrud Fort located close to the Gate, The gate and Khyber Pass are popular tourist attraction of Peshawar.

Fort Bala Hisar is a walled fortress located on a high point in the North-Western corner of Peshawar City. Its not clear who constructed the fort at this location but the fort has been captured, destroyed and rebuilt several times in the history of the Peshawar region. The last time the fort was constructed by the Sikh Administrator Hari Singh Nalwa on behalf of Emperor Ranjit Sing during the 19th Century. The fort is currently under the control of Frontier Constabulary and is opened to the general public twice in a week. You must carry a photo ID with you when you visit the Fort for identification and security purpose. 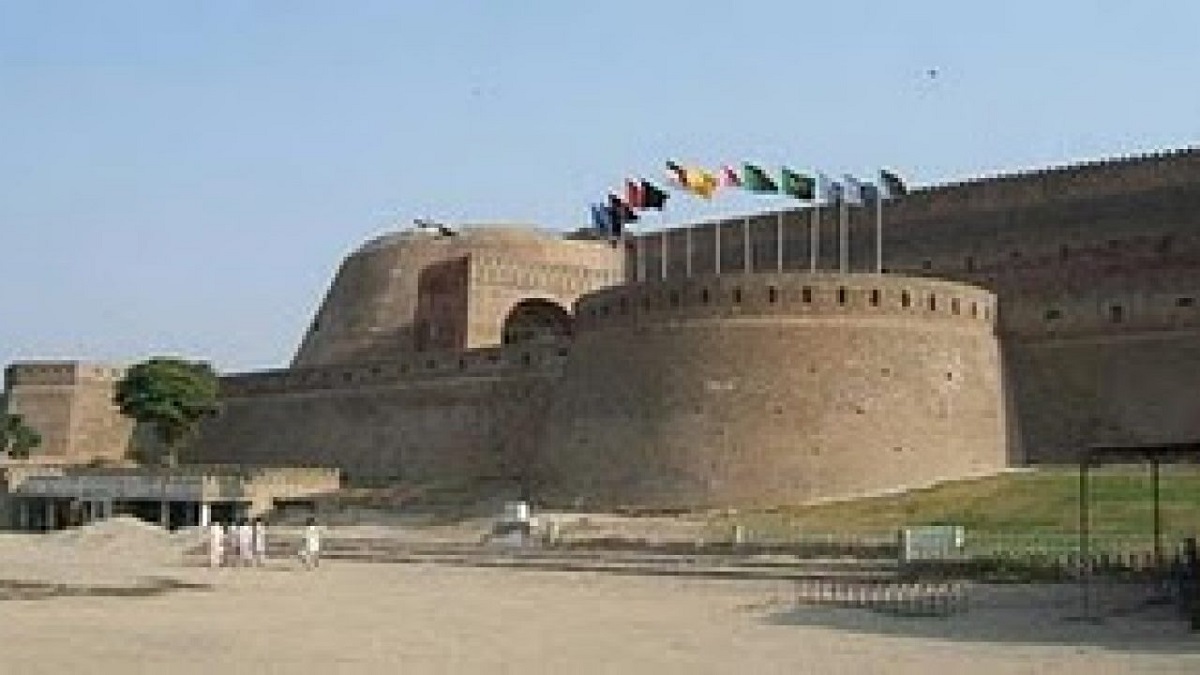 Qissa Khawani Bazaar is an iconic market area of Peshawar. “Story Tellers’ Market” being the exact translation of the term Qissa Khawani Bazaar, the bazaar with its adjoining alleyways had been the most ancient and major market district of the region where local and foreign traders assembled to make trade deals. Located close to the Khyber Pass on the old Silk Route the bazaar has witnessed the rise and fall of ruling dynasties, civilizations, faith systems, and cultural influences. Peshawar's British commissioner Herbert Edwardes in his letter called Qissa Khawani Bazaar "the Piccadilly of south Asia".

In the olden times the Qissa Khawani Bazaar bustled with story tellers representing different tribes and clans who would narrate the glories of their respective tribes in the shape of poems, songs and folklore to the shoppers at cafes and restaurants which was a favorite pastime for the visitors. The tradition has, however, been lost to the modernity and other means of entertainment. But some cafes and tea houses still have story tellers amusing the people on selected days.

The Peshawar Museum is one of the most popular tourist attractions of Peshawar. The museum has a notable collection of Buddhist artwork dating from the ancient Gandhara Empire. Founded in 1907 the museum has a vast collection of some 14000 pieces of art, sculptures, coins, manuscripts, statues, and ancient books. The museum also has some of the earliest versions of the Quran displayed in the Quran Gallery. Besides, weapons, cloaks, and jewelry dating back to Mughal era and later days has been displayed at the museum. 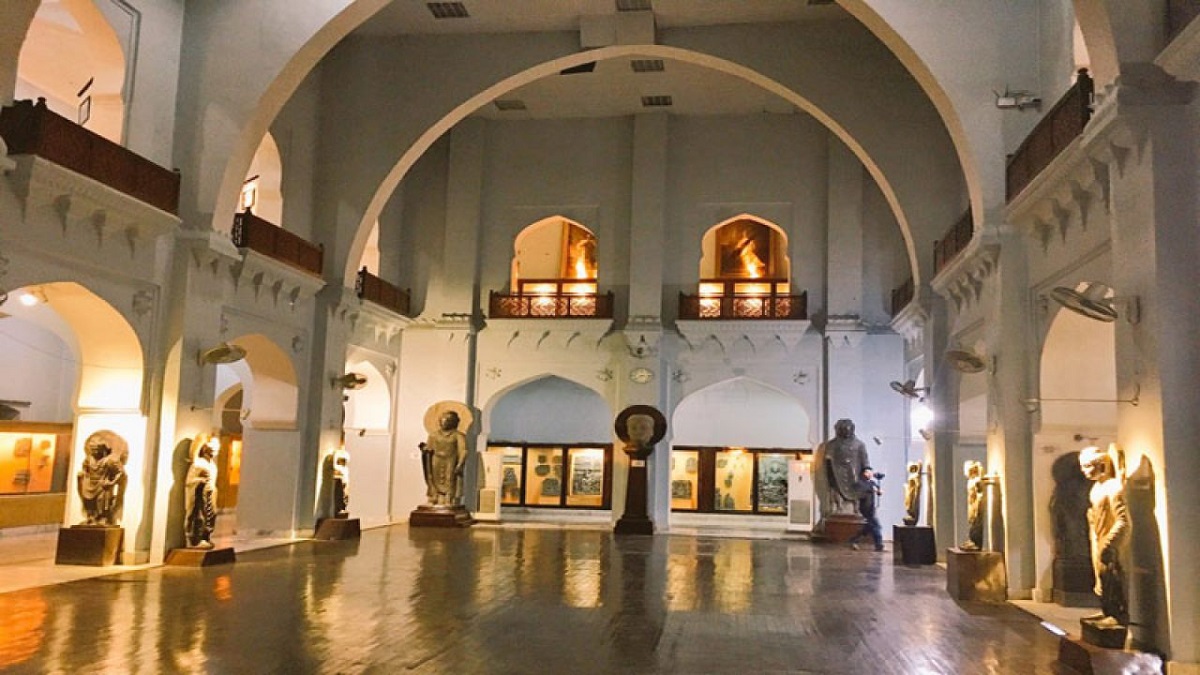 Islamia College Peshawar University is a public sector institution of higher learning that was established in 1913. The college had its inspiration from the Aligarh College movement that envisaged promoting higher learning amongst the Muslims of India who had been left out of the education and economic development during the British rule. The old building is a mix of Mughal, British and Islamic architecture and is one of the most prominent buildings of Peshawar.

Wazir Bagh or Wazir Gardens is a park with its own history. The garden was established by Sardar Fateh Mohammad Khan Barkzai alias Wazir on the behest of Durrani ruler Shah Mahmood Durrani in 1810. The garden is a huge complex that houses a pavilion, a mosque, a football ground, two spacious lawns, a water pool with fountains, and numerous tree and plant species. Wazir Bagh is a popular attraction for the locals as also the tourists.

Cunningham Clock Tower, known commonly as Clock Tower is a monument built in 1900 AD by the British governor of that time Sir George Cunningham. The tower is 36 meters tall with a base of 31 ft diameter. The opening of Clock Tower coincided with the Golden Jubilee Celebrations of Queen Victoria’s rule in the British. 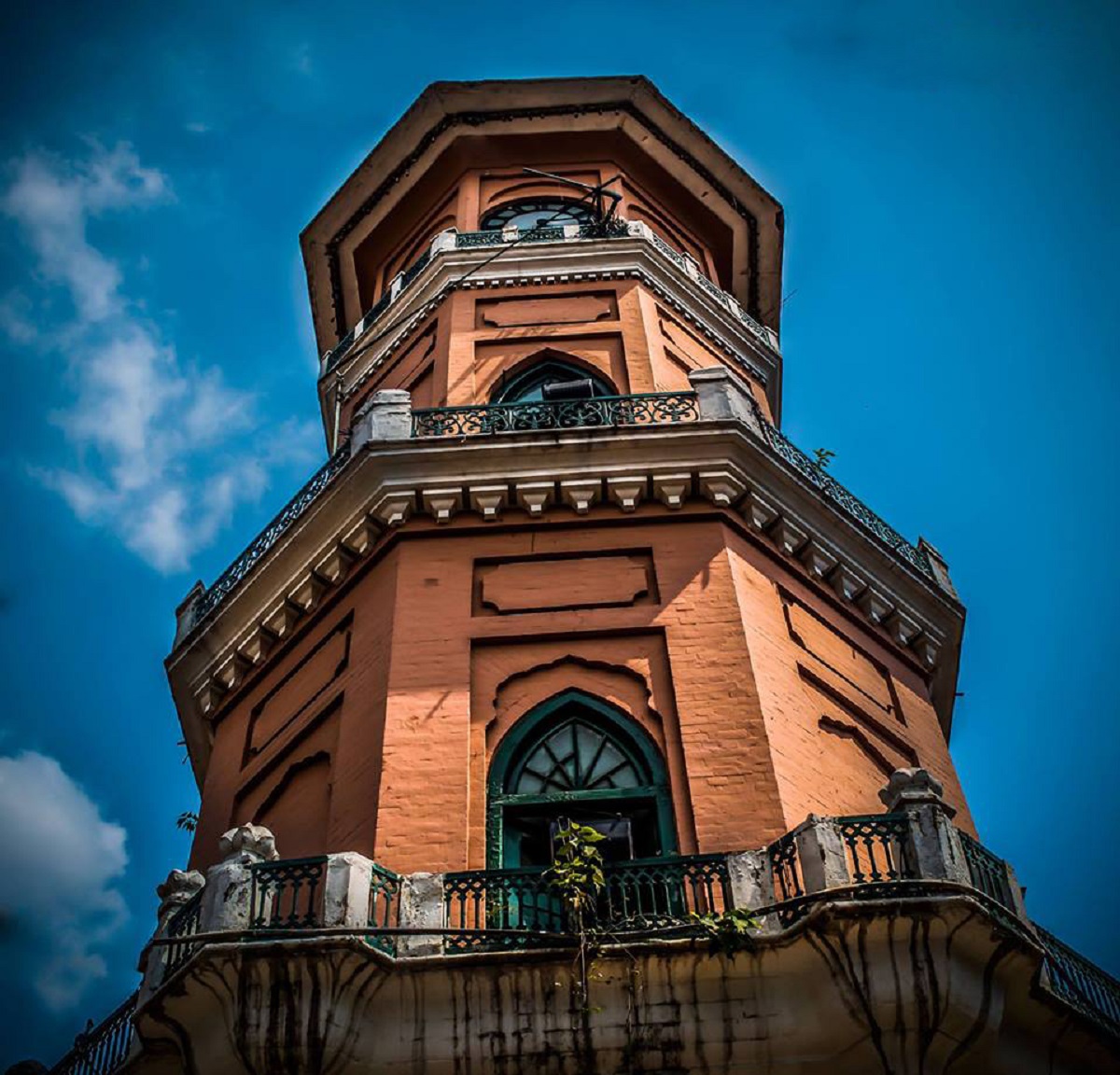 Peshawar is famous for its meats cooked in several traditional ways. Lamb meat cooked in barbeque, karahi, and dumpukht styles is very popular. In the recent years some quality fast food places have also come up. But visiting tourists usually like to eat food from the local joints and traditional restaurants. A list of food places in Peshawar is being prepared a link to which will be made available here shortly. 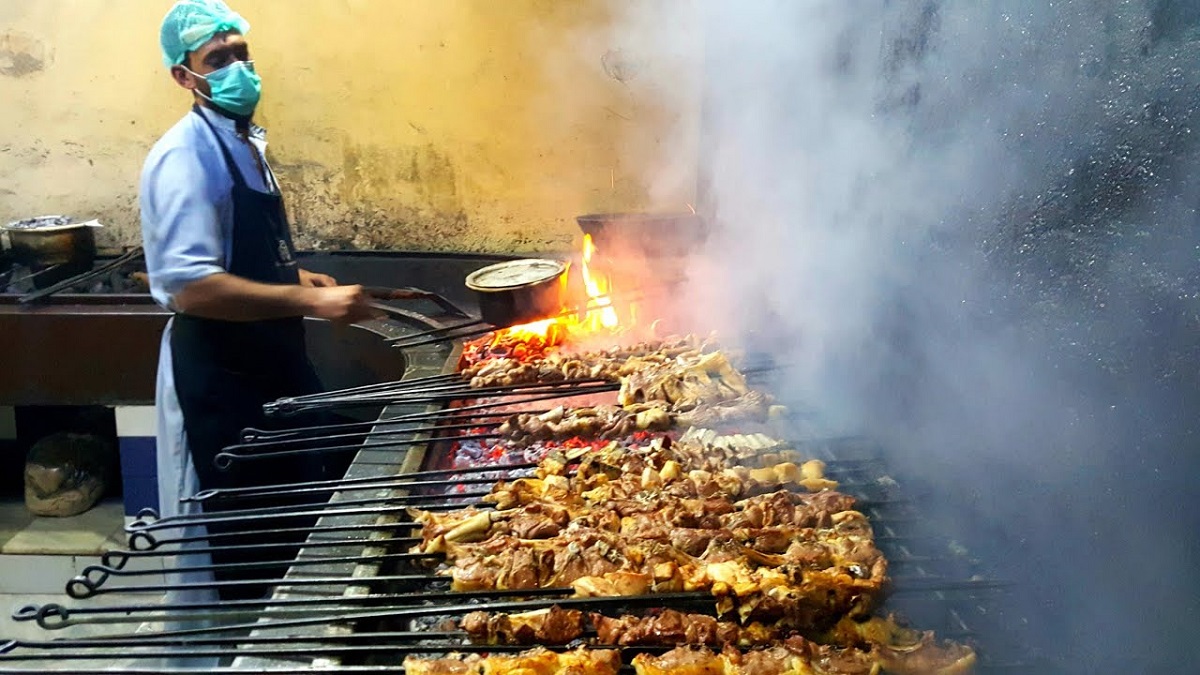