Mount Godwin-Austin (8,611 m) was there, Gasherbrum I (8,080 m) was there, and so was Broad Peak (8,047 m) with its massive under features some of which in themselves are well known Eight-thousanders ultras. However, as the luck would have it, Masherbrum as the locals call it, became first to be noticed by Lieutenant (later Lieutenant Colonel) Thomas Montgomerie in 1856 when he commenced his survey of the karakoram Range as leader of the Royal Survey Team, who aptly named it K1 (meaning 1st summit of the Karakoram Range to be fixed using Trigonometric Survey Techniques). Interestingly the height of K1 calculated by Thomas Montgomerie using his theodolite and plotting board was pretty accurate and very close to the one measured by the modern instruments. 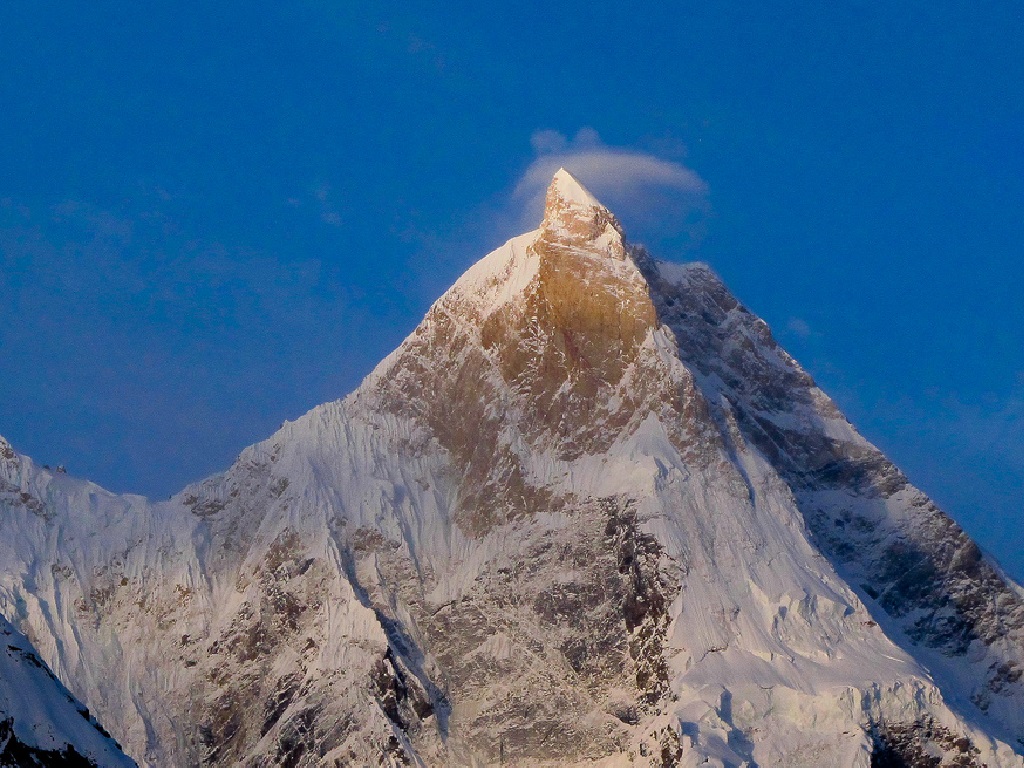 Masherbrum: The summit resembles the head of 'Mahasher' Fish

'Brum' in the native Balti language means mountain. The origin of 'Masher' is, however, somewhat unclear. Some believe that 'masher' is derived from 'Mashedar' which means a muzzle-loaded weapon in the local language. Another school of thought believes that the word 'masher' is derived from "Mahasher' which is a very popular and commonly found fish in the area. Viewed critically the second analogy sounds more accurate as the top part of the summit does resemble the mouth of a 'Mahasher' fish. Still another school of thought believes that 'masher' is derived from 'Masha' which means a lady in the local language and they believe that Masherbrum means "The Lady or Queen of Mountains". In either case the name carries a definitive sense of magnificance, elegance and beauty which is so characteristic of Masherbrum's Summit.

As mentioned earlier, the peak was discovered by Lientenant Colonel T. Montgomerie in 1956 during his survey. The first recorded visit to the peak from mountaineering point of view was in 1911 by Dr. William H. Workman and his wife Mrs. Fanny Bullock Workman when they carried out a physical reconnaisance of the peak and possible routes to the summit. The first serious attempt to reach the summit was made in 1938 which failed short of the summit and the expedition had to be called off due to bad weather conditions. There were two more unsuccessful attempts in 1955 and 1957 before the summit was successfully climbed by a joint US-Pakistani team led by George Irving Bell. Thereafter, there have been several successful and unsuccessful expeditions the most noticeable being the dramatic account of survival by French mountaineer Christine de Colombel in 1980 described in her book Voyage au Bout du Vide: Une Cordėe Alpine au Masherbrum 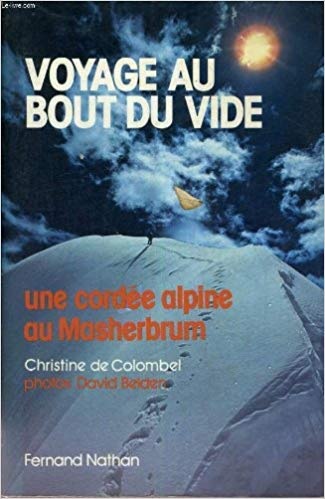 Although not an Eight-thousanders as many of its neighboring peaks of the Gasherbrum Massif, Masherbrum has the honor to be the first surveyed peak in the earliest history, thus the name K1. Due to its location, prominance and beauty, the peak figures out high on the wish list of mountaineers.