Come to think of an Eight-thousander mountain that has at least couple more Eight-thousaners, a Seven-thousander and several Six-Thousanders as its under features. Such is the enormity, complexity and beauty of Braod Peak, adorably known as Falchan Kangri by the locals. Located at northing 35°48′42″ and easting 76°33′54″ Broad Peak is integral to Gasherbrum Massif in the Gilgit-Baltistan region of Pakistan. Broad Peak is the 12th Highest Mountain in the world with an altitude of 8,051 m (26,414 ft). The mountain has several adjoining under features namely Rocky Summit (8,028 m), Broad Peak Central (8,011 m), Broad Peak North (7,490 m), and Kharut Kangri (6,942 m).  With a prominence of 1,701 m (5,581 ft) and isolation 9.12 kilometres (5.67 mi), Broad Peak is listed as Eight-thousander Ultra on the Notable Mountains List. Broad Peak has a summit over 1500 meters long, hence the name "Broad Peak" 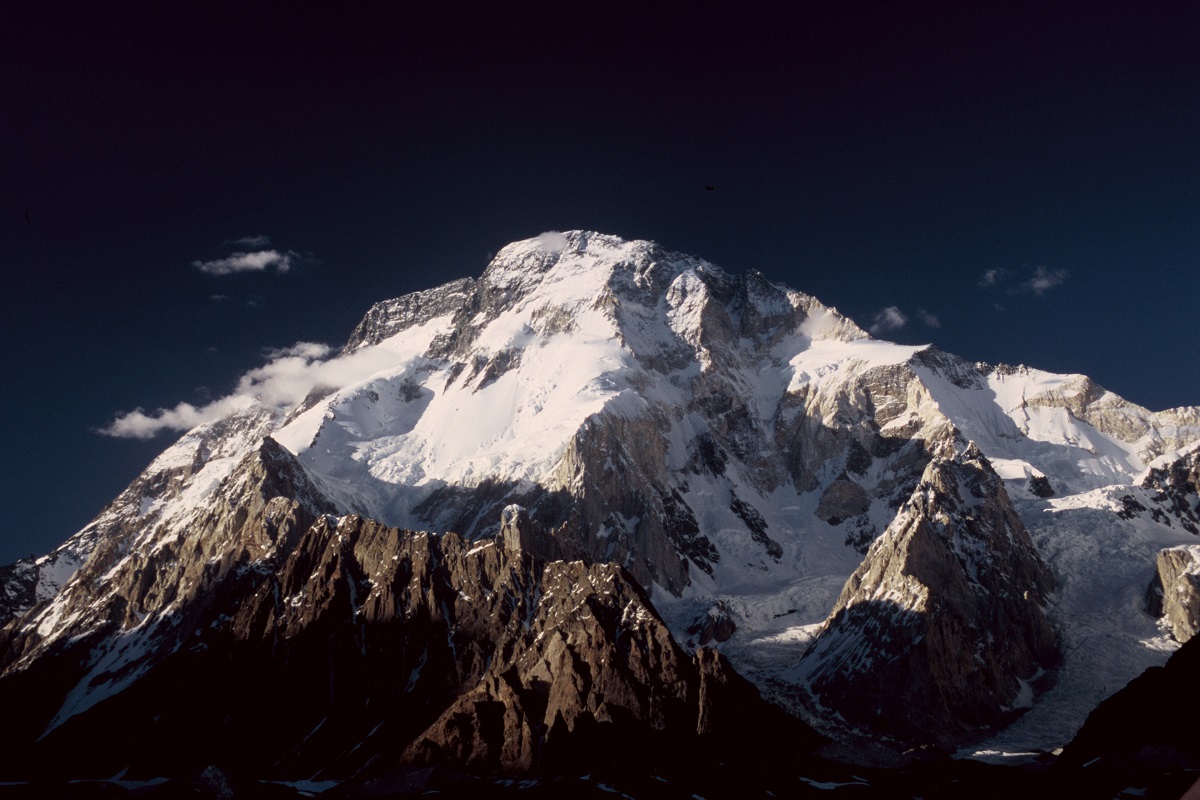 Closer view of Broad Peak from Concordia side

The first attempt at climbing Broad Peak was in 1954 by Dr. Karl Herligkoffer from Germany that failed due to snow storm and extreme cold. The first recorded successful ascent of Broad Peak was as early as June 1957 when an Austrian team led by Marcus Schmuck reached the peak without the aid of oxygen, porters and base camp support. During the same expedition, Marcus Schmuck and Fritz Wintersteller made a flash ascent to Skil Brum Peak (7,360 m) in Alpine style manouver in just 53 hours. In an other attempt during the same expedition Hermann Buhl died as a result of a fall when he and Diemberger tried to climb nearby Chogolisa (7,654 m). In the recent years Broad Peak has been successfully climbed by several expeditions from different countries and regions. The first winter ascent to the peak was made in March 2013 by a Polish team comprising of famous climbers Maciej Berbeka, Adam Bielecki, Tomasz Kowalski and Artur Malek. The first successful ascent by a woman was in 1983 by Krystyna Palmowska.

Located as part of the Gasherbrum Massif, Broad Peak is an Eight-thousander Ultra that gains its name from the fact that it has an exceptionally long summit of 1.5 km. With its joining and under features that in themselves are Eight-thousanders, Seven-thousanders and Six-thousanders of significant appeal to the climbers.